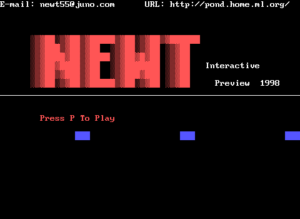 A collection of ZZT boards released to my then-website, Newt’s Pond. It features a crane game that was never implemented in any released games (though was featured in Nessness, a cancelled project). There are also a smattering of sample boards from previously released and soon-to-be-released games. It also has an advertisement for the ZZT newsletter I was trying to get off the ground and teases a few projects that never materialized, including a spy adventure spoof called “James Yawn.”