There are many balls! Get one of them to reach the exit! Have other balls turn to stone and become platforms to guide other balls to advance through all eight stages. Build your way to success!

Extra points awarded for balls left over at the end of stages.

Super Stone Ball was selected as a Freeware Pick by IndieGames.com, calling its puzzles “rock hard.” 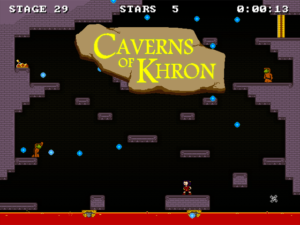 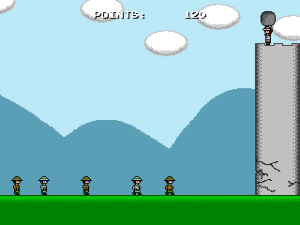 Stand atop your tower and launch boulders at the invading soldiers.

Hold X to charge up the power in your boulder, release to throw it. 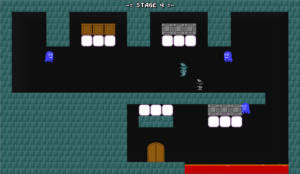 In each stage, get your body to the exit. Switch to ghost form and abandon your body to make the cloud blocks disappear and let whatever’s on top of them drop. Enemy ghosts can only pursue and hurt you while you’re out of your body.

This game was selected for inclusion as one of 100 games in moshboy’s Pirate Bay Bundle. This is an updated version, released in 2013. The original version was made for Pirate Kart V and can still be downloaded at Glorious Trainwrecks or at this link. The original version has the same stage designs, but different graphics and slightly different player character movement.

NOTE: Since late 2012, I have been working slowly on an expanded remake of this game. Possibly keep an eye out for it! 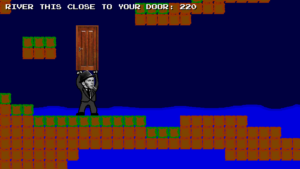 Why won’t the river stay away from Frank Sinatra’s door? Help Frank guide his beloved door to safety away from the river, up above, where the river can’t rise any higher (he’s so all alone!).

Press ‘X’ to jump and press ‘Z’ while standing next to the door to pick it up.

Made for Timezone Lottery Klik Jam #9. 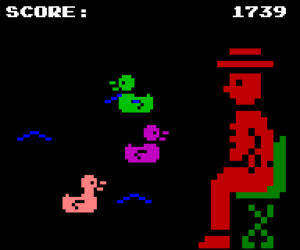 Keep an eye out for special GOLD DUCKS!

This was the first game I uploaded to Glorious Trainwrecks, part of Pirate Kart 2.