Some time next month, I’m going to release Caverns of Khron, my biggest game project to date.  A few months ago, I found a folder in my filing cabinet titled “Miscellaneous Game Development,” containing dozens of pages I wrote and drew between 1996 and 1999.  Until I’d found this, I’d basically forgotten about all the games I’d made and planned before I started making ZZT games in 1997.  I’d actually been designing games on paper since about 1990, though I didn’t have any kind of computer till 1994.  I never learned C++ or any other “real” programming languages save for a very rudimentary knowledge of QBASIC that only equipped me for the simplest text adventures.  So, if you’re interested, you’re welcome to join me on a nostalgic, navel-gazing trip through what I thought about making video games before I even knew how.

My cousin Steven introduced me to QBASIC in the mid-nineties, and it was simple enough that I thought I could write a couple small programs.  I never actually spent much time with text adventures like Zork (I loved Return to Zork, but couldn’t get my hands on an actual copy of the Zork trilogy until like 1998), but I was in love with the idea, and had played around with a couple MOOs and MUDs, more interested in the promise than any execution of the idea I’d actually seen.  Before long, I’d programmed a virtual room-by-room tour of my house–called “My House”–which forever cemented in my mind the cardinal directional layout of Pocatello, Idaho.  This and other games would be “published” under a “label” called “Moore-Tech 2000,” and I’d hang this sign on my door: 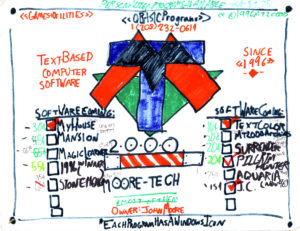 Please note that this sign only ever hung on my bedroom door on the inside of my family’s house.  The prices listed were the fees I wanted to charge my two younger sisters to give them copies of these games on their own floppy disks.  It was an evolution of when I tried to sell my sisters and cousins the Nintendo fanfiction I’d write and illustrate, bound in construction paper when I was about nine-years-old.  I also offered customized games for the low price of only 75 cents to $1.75.  I don’t believe I ever made a cent from any of my games, and rightly so.  Eventually, I just tried to get my sisters to play them.

Of the games listed, very few without the checkboxes ever were finished.  “Text Color” simply changed the color of the MS-DOS text interface.  “Pilgrim Hunter” was a text game where the player searched a square field square by square for a turkey to shoot, like a festive, unchallenging “Hunt the Wumpus.” I also apparently finished something called “J.C.,” but I have no idea what that might have been.  I seem to have been planning something called “Aquaria,” and considering my then-interests, it surely involved mermaids.

Sadly, I finally disposed of my 486 PC last year, which had what I’m sure were the only remaining copies of all the games I worked on, including the first game I ever published, “UFO Invasion,” a QBASIC text adventure uploaded to AOL and co-written with my friend Caleb.  I also once had extensive pages of planning for the sequel, which I intended to be a Wolfenstein-like FPS.  Also there was another collaboration with Caleb, a Christmas-themed game called “The Reindeer Riots,” though I can’t remember for the life of me what actually happened in it.

“Magic Learner” is the one for which I have the most documents still and was the first game I intended to be released in the world of “Khron,” a text adventure with a magic casting system and a fair amount of open exploration, to be later paired with a game called “Power Quest” which would be a text adventure with an action and strength orientation.  I’d written some amount of lore for the games’ story world, and even drew maps.  Below is a map of the game world and a modified one broken up into a navigable grid for use in the game. 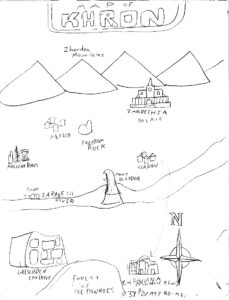 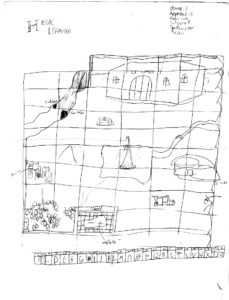 Of course, these papers are what inspired me to name my current game “Caverns of Khron” (before that, it was called “Ruins of Bufannei,” a contraction of “Bullshit Fantasy Name”).  If you’re worried about Khron canon, understand that the game actually takes place in Greschden Caverns, but the game doesn’t bear that name because it sounds stupid.

Note the copyright date on the map.  The world of Khron existed contemporarily with our own, but with a 1,960 year date offset.  P.D., I assume, once meant something. 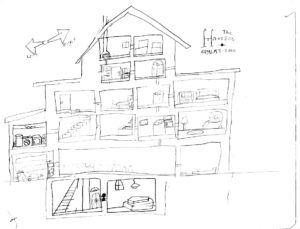 This game eventually evolved into “Jack O’Lantern,” which began life as a text adventure, and I distinctly remember drawing this map for it in my ninth grade speech class: 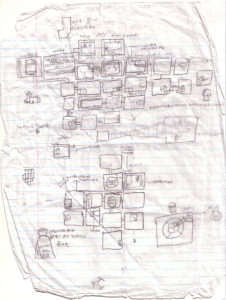 In 1997, I learned about ZZT, and found it a more attractive design platform.  I actually adapted this design pretty faithfully into a ZZT game that I published.

In those days, all my ZZT designs happened on paper before they happened onscreen. I have pages and pages of ZZT-OOP code for games like the unfinished “Bob 3: The Amazon Adventure” and “Zem! X” which I began work on in 1998 and didn’t finish until 2002. 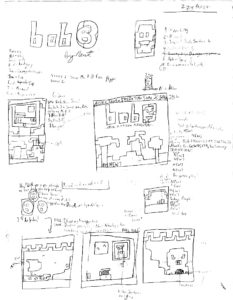 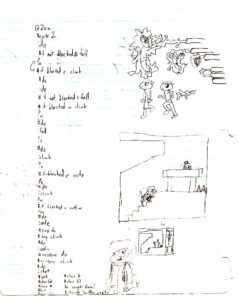 With my early ZZT games, I employed a “star” system like Tezuka Osamu’s, featuring recurring characters playing different parts in each story.  It was silly, but I was in love with the idea.  In the “Zem! X” paper, I love where I drew a picture explaining to myself what I saw in my mind and how I had to express it with ASCII characters.

My ambition was not limited to what I could conceivably produce at the time, of course.  What I wanted to make followed my interests, which in the mid-nineties became largely focused on real-time strategy games.  I have about a dozen pages of notes for “Medieval” and its expansion “Medieval Quests,” featuring a total of five factions, with unique units and campaigns. 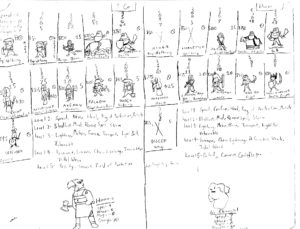 I also possessed a strange, obsessed fascination with LCD games, and went as far as to plan the screens for half a dozen games on paper. One of these, “Mythical Commander” (left) was an intended LCD real-time strategy game. “Blif the Blot” (right) was a mascot platformer that had a secret versus mode. 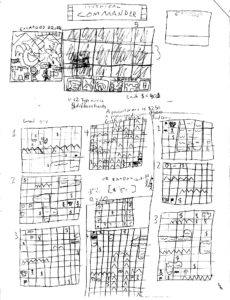 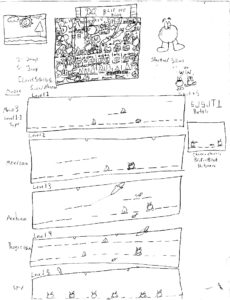 Beginning in my later teenage years, I fell in love with the link cable racing game included in Super Mario Bros. DX for the Game Boy Color, and plotted an intricate expansion of the game called Super Mario Arena, featuring a character roster with different abilities, power-ups, and a greater focus on competitive combat. I possessed some vain hope that Nintendo would somehow find out about my plans and accept my pencil drawings as the design document for a million-seller Game Boy Color game and a long career in making video games. 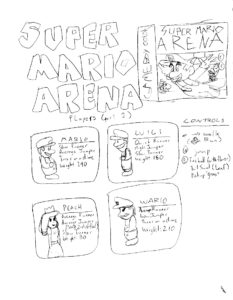 I continued to make ZZT games and began playing around with Megazeux.  Eventually, I became more interested in filmmaking than my once-intended career of glamorous, professional video game development and programming.  I kept my toes wet, working on a graphic adventure game and an online RPG fighter with my cousin, though neither project came to full fruition, and I only advised design and worked on graphics.  I wonder what would’ve happened if instead of ZZT, someone had handed me a copy of Klik N’ Play (I saw it in software catalogs, and after it I lusted), or if Game Maker had come into my life a decade before it did.

I’m going up to my mother’s house in a couple weekends.  I’m hoping to dig up some more of these kinds of papers.  I have a vague dream about picking up one of the other game concepts I know I had once upon a time and seeing if I can’t bring it to life with what I know now, just to fulfill my 13-year-old self’s dreams on some level.  It’s been somewhat inspiring to examine what I used to think about games, see where I’m similar, and see where I’m the same.

And at the very least, the 16-years-in-the-making Khron world of games will finally see the light. 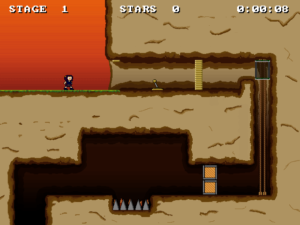