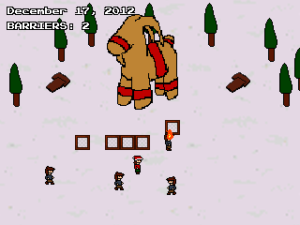 In this game, you are the guardian of the giant yule goat Gävle Goat, trying to protect the Gävle Goat from the hooligans that try to burn it down every year. Place barriers to impede their progress and approach them to scare them away in order to ensure that the Gävle Goat survives till Christmas.

Use the ARROW KEYS to move. Press ‘X’ to place barriers. Stand over the pile of blanks to get new barriers. Protect the Gävle Goat!

This game was made for Glorious Trainwrecks’s Sekret Santa Klub 2012. It was made as a gift for site administrator SpindleyQ, based on his preferences. The game also has a cameo by Dragon Santa from the SpindleyQ game by the same name.