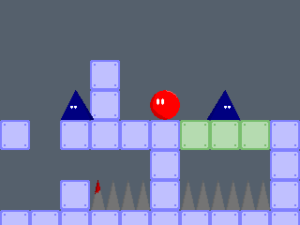 A single-room game, About a Ball is a dense, difficult platformer in which a red ball must make its way through a hostile triangle-infested series of chambers.

My first released game in six years and my first in the Game Maker engine. It grew out of a series of tests I had done based on Derek Yu’s Game Maker tutorials. The platforming is relatively simple, with stiff, fixed-height jumps and large hitboxes, but the structure of the level is built to accommodate these limitations.

The version available in the above download link is version 1.2, which gives the player unlimited lives and adds sound effects. Version 1.2 was completed in 2012 but never officially released until April 2017. The initial release had a limit of five lives and no sound (the jump action was also remapped from the up button to the X key). Both games have complicated scoring systems related to how long it takes you to complete the stage. Version 1.01 is also available.