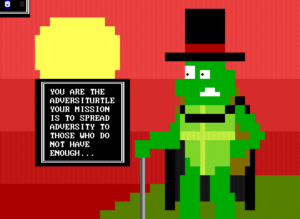 After retiring from ZZT officially in 2002 with Zem! X, my friend WiL (whose accomplishments and involvement in the ZZT community far outshone mine) convinced me to join him for the Spring 2003 24 Hours of ZZT competition. The theme was “adversity.” We won first place for our entry AdversiTurtle, an “interactive movie” about a turtle who introduces adversity into the lives of the relatively comfortable. The player takes control of AdversiTurtle as he faces off against other adversity-themed opponents, such as AdversiTofu in a series of minigames. WiL took care of most of the programming and all of the music, while we wrote the game together, and we both drew the art. I’m pretty sure AdversiTurtle was based on one of my character designs, but I can’t entirely remember.

Due to a hilarious mix-up with emails, the version we submitted was missing some of the art boards I was supposed to complete and send to WiL. This version is the correctly synthesized edition.